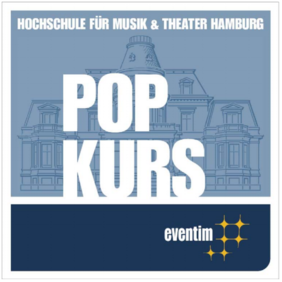 Hamburg, 11 March 2009 – In an unprecedented initiative involving CTS EVENTIM, other backers and the Free and Hanseatic City of Hamburg, long-term financial safeguards were provided in summer 2008 for the continued existence of the ‘Pop Course’ (Kontaktstudiengang Popularmusik), a part-time higher degree course in pop music at the Hamburg College of Music and Theatre. CTS EVENTIM also lent its name to the course. For selected young talents, the EVENTIM POP COURSE has now begun.

Launched in 1982 as a pilot project, the ‘Pop Course’ in Hamburg is not only the oldest but also the most successful incubator for musical talents in Germany. Over the past quarter-century, the Pop Course has powered and inspired German pop music more than any other institution – playing a seminal role in emancipating the national pop and rock scene from established British and American models. Many of the performers who have contributed to the Renaissance of German pop music learned the essential skills and know-how for their career in the Pop Course.

Graduates of the Pop Course include internationally successful bands such as Wir sind Helden, Seeed, Revolverheld or Texas Lightning. Together with the renowned performers who teach the Course, CTS EVENTIM has now welcomed to Hamburg those 57 young musicians from an immense range of different styles who succeeded in gaining one of the much sought-after places in the selection procedure. ‘Thanks not least to the Pop Course, Made in Germany is today a seal of quality that enjoys international recognition in the field of pop music as well’, commented Rainer Appel, Vice-President of CTS EVENTIM. ‘We are especially delighted that our own commitment has helped to maintain such a key institution and to continue offering deserving young talents a springboard into careers as professional musicians.’

About the EVENTIM POP COURSE
​​​​​​​The “Kontaktstudiengang Popularmusik” (part-time higher degree course in pop music) at the Hamburg College of Music and Theatre is the pioneer in pop music training in German higher education. Launched in 1982 by as a ‘pilot study in pop music’, the EVENTIM pop degree course has since accepted around 50 musicians each year from all over Germany in a selection procedure involving several steps, who are then coached in two intensive courses each lasting three weeks. This pioneering concept has fostered and produced many course graduates in recent years, who for their part have been having an enormous influence on Germany’s music scene. They include bands like Revolverheld, Wir sind Helden and Seeed, or performers such as Ute Lemper, Tim Fischer or Heinz Strunk. Many other participants in the courses have found a place in the music business as studio or live musicians, or in music publishing companies, recording companies and in higher education. Teachers on the EVENTIM POP COURSE include Jane Comerford, Prof. Anselm Kluge, Prof. Peter Weihe, Prof. Curt Cress, some of Germany’s most highly respected and accomplished lecturers in the field of pop music.

About CTS EVENTIM
CTS EVENTIM AG, listed in the SDAX index (ISIN DE 0005470306), is Europe’s market leader in the ticketing field and one of the leading providers of Live Entertainment. More than 70 million tickets for well over 100,000 events are sold annually using systems developed and marketed by the EVENTIM Group. In addition to more than 8,000 stationary box offices throughout Europe, sales via the Internet and especially via the www.eventim.de and www.getgo.de portals are gaining increasing importance.